Module supply-chain concerns are top of mind for solar project developers, EPCs, and financiers across the US due to import tariff concerns and the ongoing anti-circumvention petition.  As a result, additional interest has been generated in domestically manufactured thin-film cadmium telluride (CdTe) modules. Thin-film modules are far from a new solar technology. Instead, they have a proven 20-year track record in fielded systems in the US and globally. According to the US Energy Information Administration, thin-film modules accounted for 28% of installed utility-scale solar-electric capacity since 2016.

The team at Pure Power Engineering has significant experience in the design, installation, and operation and maintenance (O&M) of thin-film PV power plants. In addition to simplifying potentially complex decisions for our clients, we will evaluate a project’s suitability for thin-film modules along with providing effective design techniques. 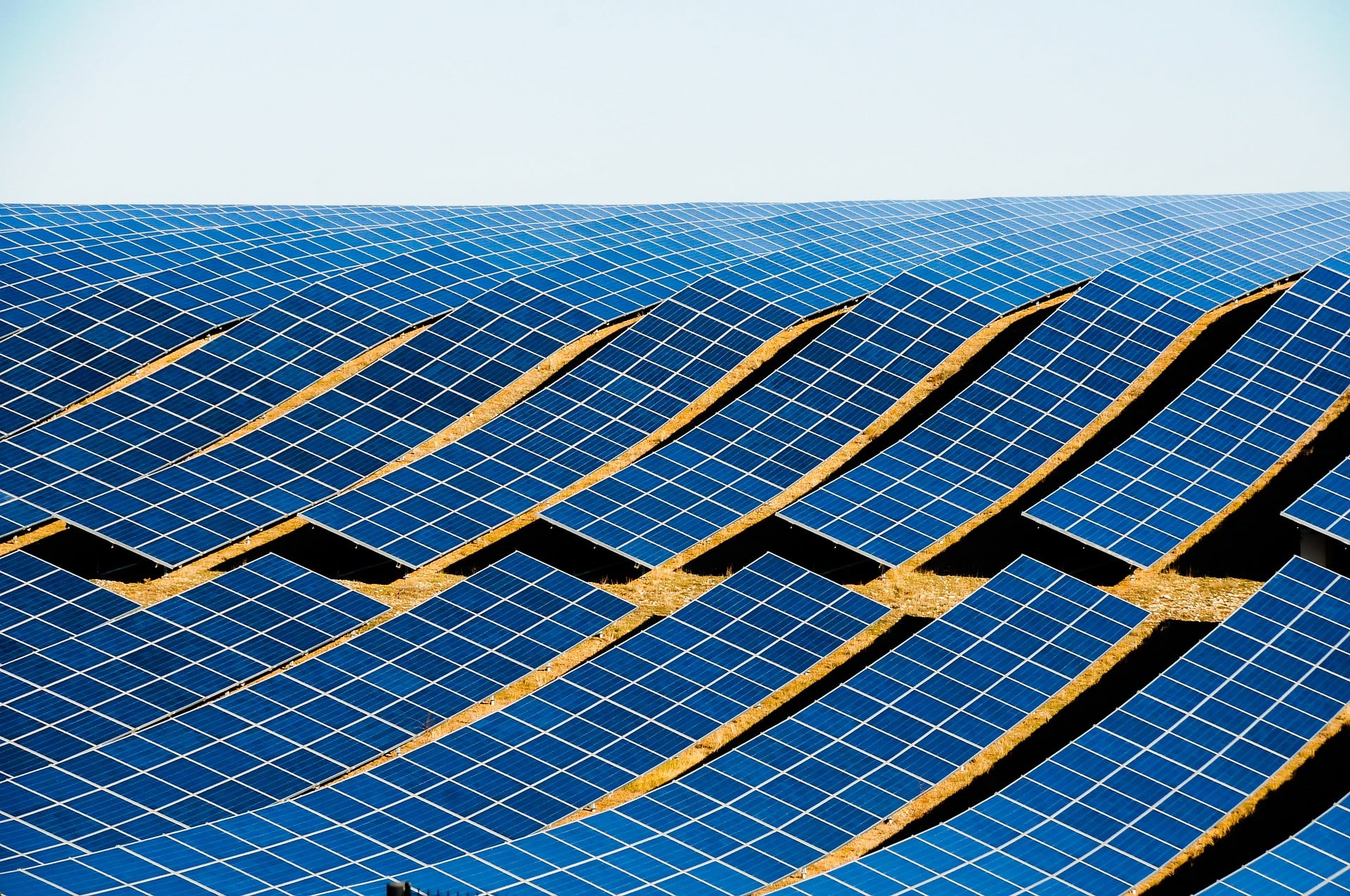 While there are several different types of commercialized thin-film PV modules, the vast majority of thin-film modules manufactured and deployed globally utilize cadmium (Cd) telluride (Te) semiconductors. While CdTe solar cells have lower efficiencies than c-Si cells, they are a less expensive module to manufacture. The low cost per watt of CdTe thin-film, combined with the strengths of the technology, allows developers and EPCs to drive down the levelized cost of energy (LCOE) of thin-film projects.

Module Electrical Characteristics. Three of the most significant differentiators between the electrical characteristics of CdTe and c-Si modules are voltage, efficiency, and power density. Due to their materials and construction, CdTe modules are inherently high voltage, and in turn low current, compared to their c-Si counterparts. 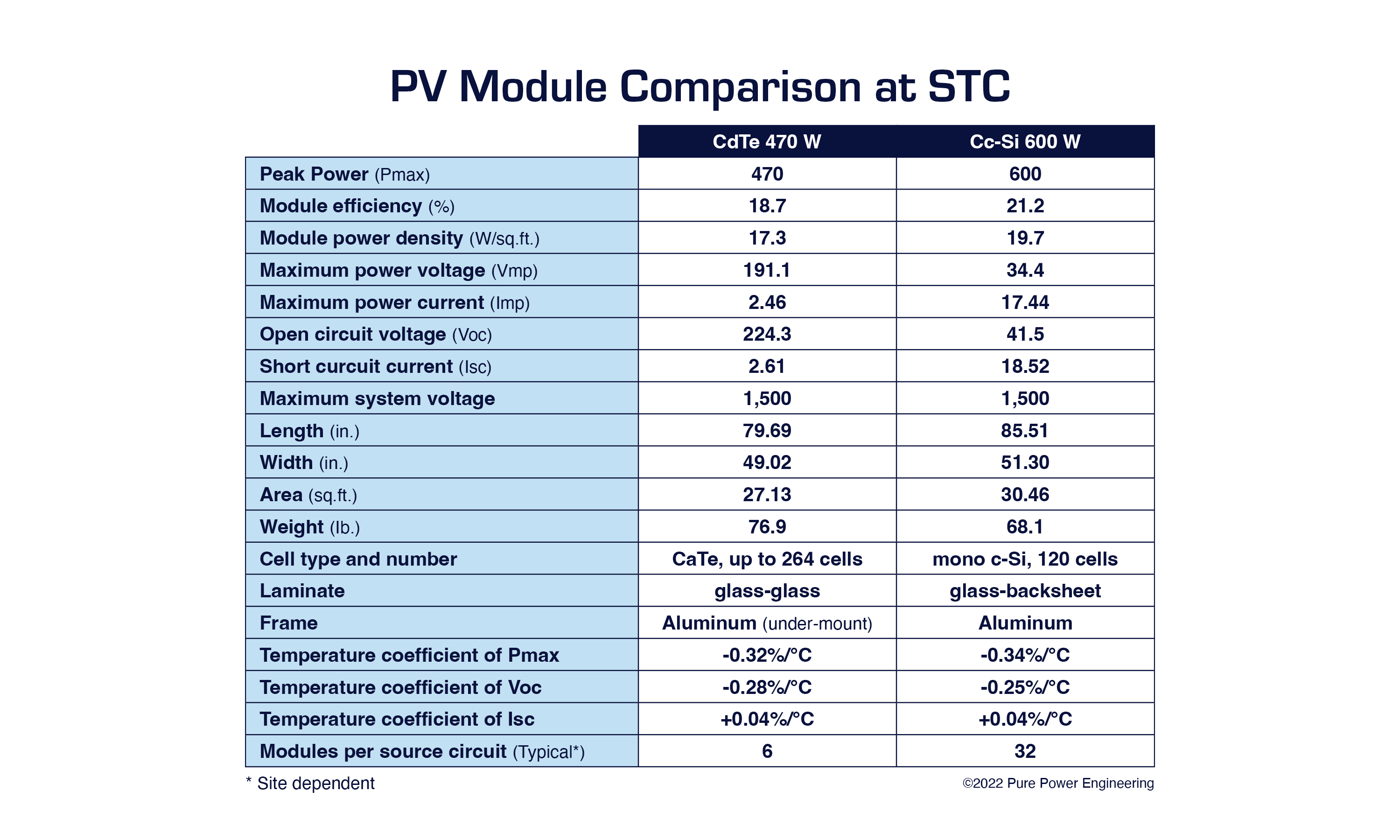 The significantly higher voltage and lower current, and the lower power density of CdTe modules drive divergent design approaches when compared to systems using large-format c-Si products. In turn, these fundamental design differences play out when construction crews deploy the arrays in the field.

Site considerations for thin-film projects. As a rule of thumb, projects with capacities of 20 MW and larger are typically good candidates for CdTe arrays. Due to the size of these projects and the lower power density of thin-film modules, large project sites with uniform terrain and boundaries are preferable for CdTe projects. As such, the installation base of thin-film systems in the US tends to be generally weighted toward expansive, open sites in the western states rather than sites in the midwest or eastern states that tend to be less uniform and more space-constrained. To maximize project revenue, power density is an important consideration, especially for small, space-constrained sites.

Voltage impact on module string lengths. The high voltages that are inherent in CdTe modules significantly impact module string length and the upstream portion of the DC collection system. The current 1,500 Vdc ceiling of ground-mounted projects allows for a typical string length of 6 modules in CdTe systems. In comparison, assuming the same 1,500 Vdc limit, the 600 W large-format module described above may allow for up to 33 modules per source circuit depending on the site’s temperature characteristics.

Influence on racking selection. CdTe modules used in large-scale array fields are frameless and feature glass-on-glass construction. As such, racking and module clips used in conjunction with thin-film arrays have product-specific designs. As a result of the large installation base of CdTe thin-film projects in the US, numerous manufacturers now offer racking systems developed specifically for thin-film modules. This is the case for both fixed-tilt and tracking arrays.

Installer training and module handling. Similar to working with any new solar or energy storage equipment, thin-film modules require product-specific training. Proper training will minimize module breakage and ensure high-quality installations. Due to their glass-on-glass construction, thin-film modules are more susceptible to breakage during product manufacturing, distribution, and installation. It is poor practice to use installation crews that are unfamiliar with thin-film module best practices without adequate training from experienced EPCs coupled with a sophisticated and rigorous quality assurance process. Experienced EPCs account for this during product procurement. Additionally, it is important to warehouse a sufficient number of replacement modules to ensure an inventory level that will support future O&M activities. While this is an important consideration for both c-Si and CdTe modules, it is especially the case for thin-film modules due to their less common, product-specific form factor.

Just as design and installation teams require product-specific training for thin-film projects, so do the O&M teams that will be supporting these systems over their operational lifetimes. As mentioned previously, the high-voltage characteristics of CdTe modules result in more complex DC collection systems when compared to c-Si arrays. Just as product-specific training is imperative for installers who are inexperienced with thin-film arrays, O&M teams will also greatly benefit from training by technicians with significant experience with thin-film projects.

Due to the cell orientation and design, CdTe modules are very resistant to both high temperature, shade and light-induced degradation (LID). This helps to overcome their lower efficiency for a given footprint. It also allows the user some added flexibility in row spacing and further fits the narrative of use in west and Midwest regions, where high temperatures are the norm.

Quantifying the Benefits of Thin-Film Arrays

Accurate energy and LCOE modeling by an experienced analyst enables project stakeholders to account for all of the factors that contribute to the decision to specify thin-film or c-Si modules for a given project. Variables including CapEx costs, design, installation, and O&M details, and site characteristics such as climate, topography, and available space and site uniformity, all inform the analysis. As with most things in life, experience goes a long way to ensuring a successful thin-film project.

Are you looking for more pro tips for your solar and ESS projects? Contact Pure Power Engineering to learn more about our value-engineered design and construction drawing services

This entry was posted in Photovoltaics, PV, Utility Scale Solar by Eric Loos

Module supply-chain concerns are top of mind for solar project developers, EPCs, and financiers across the US due to import tariff concerns and the ongoing anti-circumvention petition.  As a result, additional interest has been generated in...

Continue Reading →
Can Pure Power do it again in 2020?

How does Pure Power keep its stellar reputation year after yet?  Simple… our team stays together and gets more experienced year after year.  We are starting the year with 29 engineers. Lets see if we end the year with all 29 (in addition to some new...

Join the team that produces the best value engineered and constructable drawings in the industry. You will be coming into a culture of constant education, improvement, and teamwork. As a Pure Power engineer, challenge yourself every day to make each...