When to use PVsyst, HelioScope, and SAM

At Pure Power, our project managers and engineers use photovoltaic simulation software developed by PVsyst, Folsom Labs, and the National Renewable Energy Laboratory (NREL). By having access to and experience with multiple complementary tools, we are able to select the best software for specific applications—depending on the use case, target audience, or project stage. Here I provide a high-level overview of how, when, and why we use PVsyst versus HelioScope or System Advisor Model (SAM).

PVsyst is the solar industry’s preferred software simulation tool for bankability analyses and acceptance testing. This incumbent status is both a function of the platform’s capabilities and stakeholder confidence in its results. Accurate energy modeling is essential to photovoltaic system financial models, capacity tests, and performance reports. However, accuracy is not innate to a specific software, but rather is a function of how that software is used. In this context, confidence is earned over time via repetition, experience, and accrued knowledge.

As an owner’s engineer, Pure Power has run thousands of performance models and analyzed thousands of operational systems. This process is inherently collaborative, involving multiple stakeholders—developers, EPCs, OEMs, engineers, researchers, and financiers—all of whom are motivated to learn from past experience and apply that knowledge to future projects. By sharing information and best practices, we are able to use modeling inputs that are not only based on industry-accepted standards but also backed by empirical data.

The industry’s relatively long history with PVsyst is one of the primary reasons that the solar project investment community has largely standardized around PVsyst energy models. In 1992, André Mermoud, a PhD physicist from the University of Geneva, began developing Windows-based PV simulation software. Mermoud rewrote PVsyst in its entirety in 1999, enabling graphical interface capabilities. For more than 20 years, the developers behind PVsyst have supported U.S.-based project sites and provided periodic software and database updates.

To the extent that this experience breeds confidence, it results in a positive feedback loop. Accurate energy models reduce project risk. Risk mitigation improves capital costs and return on investment. Today, many project financiers have successfully underwritten billions of dollars’ worth of contracts, transactions, and developments based on energy models produced using PVsyst. This direct experience and institutional learning is what allows Pure Power to use PVsyst to produce bankable solar and solar-plus-storage energy models for investors, owners, and financiers. This experience and expertise with PVsyst is equally applicable to energy and capacity tests conducted during solar project commissioning or acquisition. 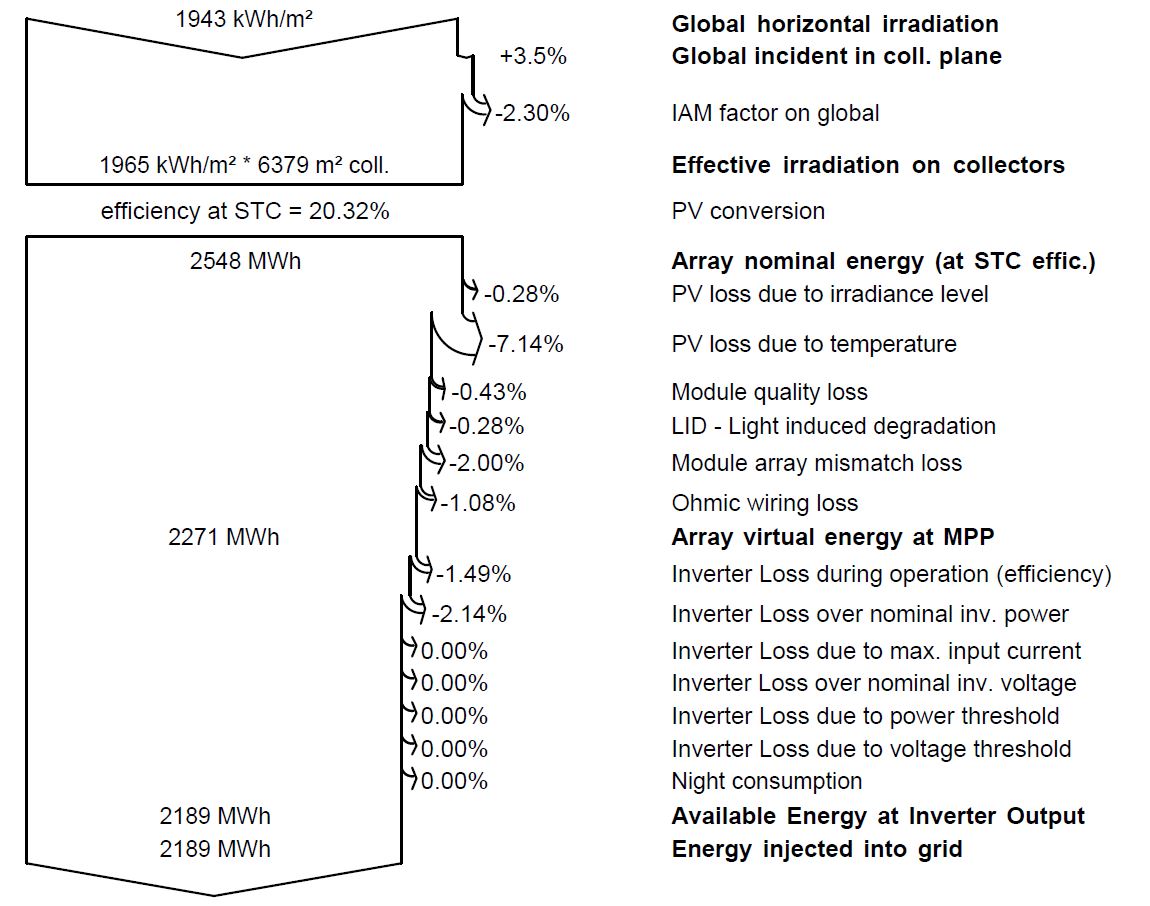 From the perspective of a power user, PVsyst is uniquely capable of providing a granular analysis of irradiance losses, array losses, and system losses. The granularity and control in PVsyst allows users to account for, among other things, module quality losses; string mismatch losses; soiling losses (including snow); ohmic wiring losses in the DC collection system; inverter losses; transformer losses; and auxiliary losses. The software is also unique in its ability to simulate system degradation and aging effects, which are essential for understanding energy production and economic performance over time.

PVsyst includes a large weather database and allows users to import meteorological data from other sources. The solar simulation platform also supports probabilistic assessments such as P50 and P90 analysis, which are statistical approaches used to increase confidence in the predicted solar resource and resulting energy yield. In late May 2020, PVsyst released Version 7.0, which supports 64-bit processors. This release enables larger project capacities, more complex shading analyses, bifacial system modeling, and more advanced economic evaluations. While these increasingly powerful capabilities make PVsyst an ideal tool for engineers, the most powerful software tool is not necessarily the best tool for all users and project stages.

HelioScope is an increasingly popular PV system simulation software for the early stages of project development. Developed by San Francisco-based Folsom Labs, founded by Paul Gibbs and Paul Grana, HelioScope is a cloud-based solar project design platform available by subscription. Officially released in 2014, HelioScope uses the same core mathematical calculations as PVsyst for energy modeling. Unlike PVsyst, however, Helioscope features an intuitive graphical user interface with Google Earth and SketchUp integration, is operating system agnostic, and does not require sophisticated processing capabilities. Because the platform is relatively user-friendly, HelioScope is often used as a pre-sales design tool. 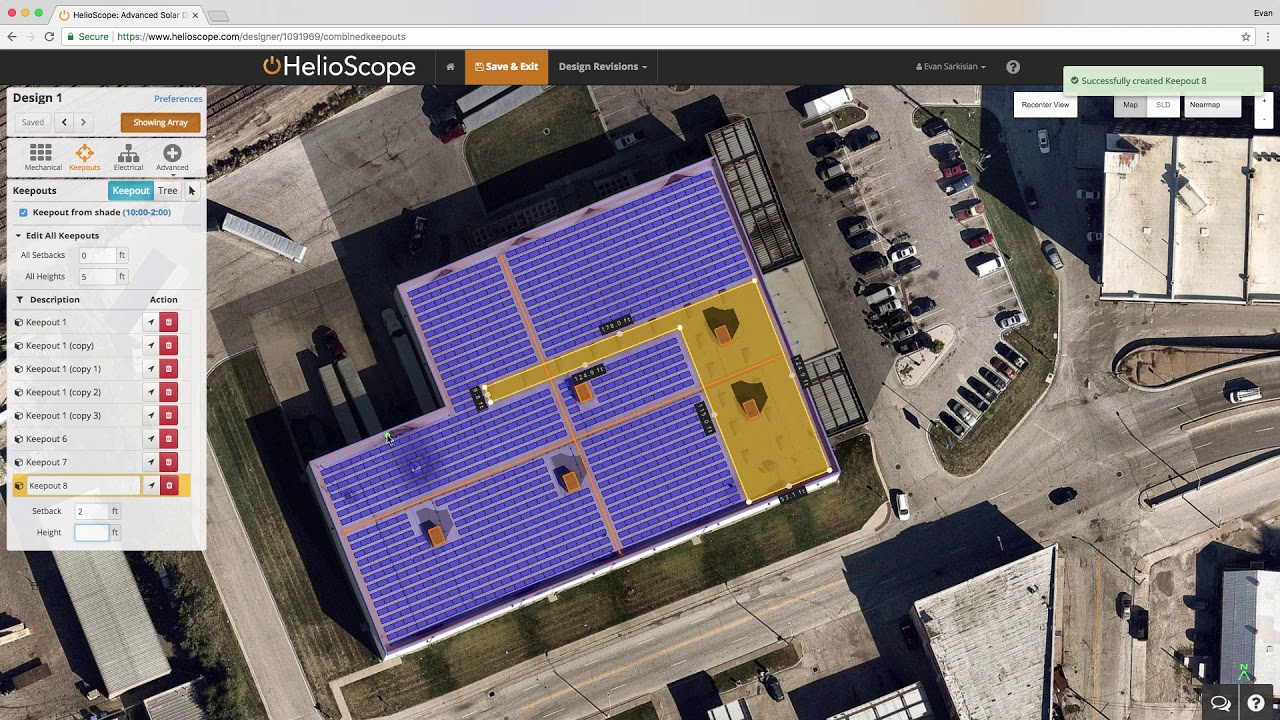 When used in the early stages of project development, HelioScope allows for remote aerial site assessments and shade analyses; preliminary system designs and equipment layouts; rough-order-of-magnitude energy and financial models; and automated proposals. Best of all, sales and development personnel can often generate these designs, models, and proposals with minimal input from engineering resources. In this context, Helioscope provides a lot of value to organizations via its ability to minimize soft costs and improve operational efficiencies.

In residential applications, HelioScope shading analyses and energy models are often acceptable to jurisdictions and considered adequate for project financing. This is not the case in C&I or utility applications for PV power systems. In large commercial rooftop or ground-mount solar applications, PVsyst remains the de facto industry-standard software for financial analyses and performance assessments. As such, PVsyst is the photovoltaic system energy modeling tool of choice for owner’s engineering firms such as Pure Power.

SAM is a free techno-economic simulation software for renewable energy systems—including but not limited to PV and solar-plus-storage applications—developed and distributed by NREL. In 2005, researchers at NREL and Sandia National Laboratories collaborated to develop SAM, which was originally called the Solar Advisor Model, as an internal tool for analyzing solar technology improvement opportunities. In 2010, NREL changed the name of the software to the System Advisor Model, reflecting the fact that the tool can simulate a wide variety of renewable technologies—such as flat-plate and concentrating PV, solar water heating, wind, geothermal, and biomass—and compare performance against conventional power systems.

As the most powerful free software for grid-interactive PV power systems with optional battery energy storage, SAM is widely used by researchers, policymakers, and program administrators. Most financiers do not accept SAM energy models in lieu of PVsyst reports for project underwriting. Within the broader industry, however, SAM is considered a trusted and validated simulation software from an independent third party.

As an example, since the 2017 edition, the National Electrical Code allows licensed professional electrical engineers to determine the maximum circuit current in PV systems with a generating capacity of 100 kW or greater by calculating the “highest 3-hour current average resulting from the simulated local irradiance on the PV array accounting for elevation and orientation.” According to an informational note accompanying Section 690.8(A)(1)(2), Sandia National Laboratories provides an industry-standard method for calculating maximum PV system current; the informational note further clarifies that NREL’s SAM software uses this accepted calculation methodology.