Our first article 2014 NEC 690.12 Rapid Shutdown for String Inverters on Flat Roofs we explained the basics of implementing a rapid shutdown system using string inverters on a roof.  In that article, we gave a simple example of a single array.

What happens when there are two separate subarrays feeding the same inverter, or the subarrays are greater than 10' apart?

The code doesn't clearly state how to approach this scenario. In these types of situations, Pure Power looks at the philosophy of the code and what it is trying to achieve, and develops an interpretation consistent with the intent of the code.

Intent of the Code:

The intent of the rapid shutdown code section is to provide an area of work for emergency responders to safely move around and conduct operations on the roof without the risk of touching an energized conductor.

In the event of an emergency, the emergency responders can activate the rapid shutdown initiation device, then safely move around the roof knowing any areas within 10' of an array may be energized, but as long as they remain greater than 10' from a PV array, any solar AC & DC conductors they encounter will be de-energized.

There are a lot of differing opinions on how to interpret 690.12(1), which is the part  that is supposed to define the distances of the controlled conductors. Lets start by looking at the code's language:

Requirements for controlled conductors shall apply only to PV system conductors of:

Here is our breakdown of these two items:

PV system conductors of more than 1.5 m (5 ft) in length inside a building

The first part of 690.12(1) defines the controlled conductor distance for conductors inside a building. This clearly states if you run the conductors in the building, any length of conductors over 5' is a controlled conductor and subject to the rapid shutdown rules. Less than 5' and it's not. This part is pretty black and white. This is more common in residential systems, but usually not encountered on commercial scale flat roof systems.

The second part of 690.12(1) defines the controlled conductor distance for conductors more than 3 m (10 ft) from a PV array. This part applies to a majority of flat roof systems.

A topic that often comes up with AHJs and other industry professionals is whether you can extend a conductor from one subarray’s 10’ zone into an adjacent array’s 10’ zone.  The code does not have any language stating the 10’ is from an individual array, but rather the general statement “from a PV array”.   So, from a black and white code perspective, the conductor won't be a controlled conductor as long as its 10’ or less from a PV array (it doesn’t need to be a specific array). It would be nice if the code explicitly stated “any array” to avoid doubt, but we still take away the same meaning from a literal interpretation of the current language.

Here is an example of this scenario:

Over the years, we've had discussions on other interpretations and implementation ideas for this article of the code. Some believe the 10’ boundary should be interpreted as conductor length. We disagree with this, because the code doesn't say anything about length in part (2). More importantly the 10' conductor length interpretation doesn’t provide a realistic benefit to the emergency responder. Responders need to react quickly and focus on the task at hand, not deciphering complex implementations of the rapid shutdown rule. They are not going to start measuring the lengths of conductors to see if the controlled conductor zone is actually 5’ or 8’ from the array, as it may vary from subarray to subarray.  The 10’ boundary is the worst case scenario and something responders can easily understand and react to without hesitation or distraction. As such, even if a conductor length interpretation was implemented on a system, the responders will still need to assume the 10’ zone is worst case and proceed accordingly.  Therefore, we believe the 10’ length of conductor interpretation should not be used.

If solar professionals are confused on how to interpret the rapid shutdown code, I can only imagine how confused the non-technical emergency responders must feel. As such, Pure Power recommends that you add directions on the label.  A directory label is already required to be placed on the rapid shutdown initiation device per 690.12(4), but we believe you need do to more than just call out the name and location of the main disconnect switches. To ensure the safety of the emergency responders, be sure to include directions to this label that concisely explains how to use the rapid shutdown system. 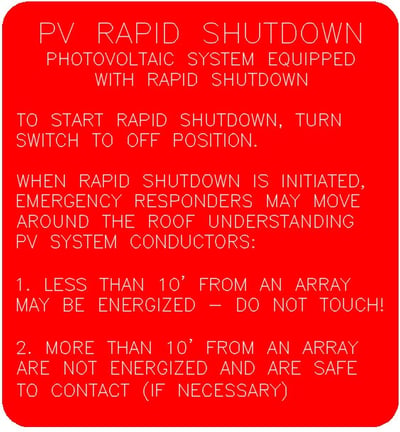 I hope this clarifies things. If you have any comments or suggestions Id be happy to discuss them.