While conducting O&M on a Satcon 250kW central inverter, we noticed this fan with an object lodged between the blades. 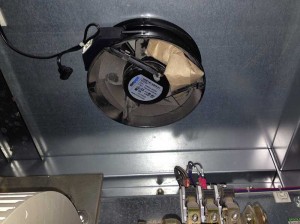 After inquiring with the owner, we learned another O&M company was called in to repair a squealing fan bearing. Apparently, rather than replacing the fan they opted to stop the noise by stuffing cardboard inside the fan which preventing it from spinning. While that stopped the noise, it put the inverter at risk of overheating. We have seen a lot of corners cut over the years, but this may be the most egregious offense yet.

Learn from this owner's mistake and only hire qualified technicians to repair your solar PV system!

This entry was posted in Energy Storage by Rick Ivins